Learning to let go and forgive

I got an email a few days ago from someone asking me how I was diagnosed with my autoimmune diseases, what initial tests were run, etc. As I replied to her email I was transported back to all the doctor appointments prior to my diagnosis. The doctors didn’t believe me, they didn’t listen to what I had to say (nor cared), they thought it was all in my head, they looked down on me because I was young, etc, etc, etc…

Responding to that email made me realize I’ve never opened up about that part of my journey, and I’ve never dealt with the emotions I tried to forget long ago.

But I think I’m ready now.

Getting a diagnosis of psoriatic arthritis took several years, and several doctors.

In 1994 (I was 14) a rash developed on the back of my head and on other various places of my body. Our family doctor in Kodiak ran blood tests and also took a biopsy of the rash from my side, along my outer rib cage (right where the band of my bra is). The chunk of flesh they took was about a 1/4 inch deep and a 1/2 inch wide. I really don’t know much about biopsies, but I look back and think that much was excessive. It hurt like hell, and I still have a scar.

Nothing ever came out of the biopsy or the blood test. Our doctor told my mom it was probably eczema and prescribed steroid cream.

In 1997 I finally saw a dermatologist in Anchorage (there were no dermatologists in Kodiak). She said the same thing, it was eczema.

In 2005 (I was 25) I had my first child and just a few months after I had her I developed constant chronic pain and swelling in my left foot. A podiatrist told me I had a stress fracture (that wasn’t visible on x-ray). I was in and out of a boot cast for over a year. Eventually I finally ditched the boot cast.

Over the next few years I saw a total of 4 podiatrists and 1 orthopedic surgeon. I would complain to the doctors that “my bones ache.” You would’ve thought that would have thrown a red flag…

One podiatrist I saw multiple times kept telling me I wasn’t getting better because I wouldn’t stay off of my feet (My daughter, Kylie, was a little over a year old at the time and was just learning to crawl/walk. Sitting on the couch all day and not caring for her wasn’t an option.). This same podiatrist also told me my foot wasn’t healing because I refused to wear appropriate footwear. She didn’t seem to care that my foot was so swollen it wouldn’t fit into anything else but a flip flop. But what did I know? According to the podiatrist, I was just a young mom (who obviously didn’t know anything).

I saw a different podiatrist in the same office and told him that I didn’t think the other doctor I had been seeing was listening to me. He found the most painful place on my foot and squeezed it so hard that it made me scream. He smiled and said, “yep, she’s right… it’s a stress fracture and you’re not getting better because you’re not listening to her.”

I left the office and cried some more. It’s hard for me to look back on that day and not think he did it on purpose. That he purposefully inflicted physical harm just to try to prove a point. My foot hurt for days. I never ever went back to that doctors office.

I doubted myself. I started to wonder if they were right. Was it my fault my body wasn’t healing?

I took a break from doctors.

In 2007 I made a last ditch attempt to try another doctor. Fortunately, she was very kind to me and sent me to try physical therapy. It didn’t work (of course). I gave up searching for answers.

In 2008 I had my second child. When she was just a few months old she ended up getting some allergy testing done. Since we were talking about eczema with the doctor, I made mention of the rash on the back of my head. The doctor asked to see it, and then said, “Megan, I’m not a dermatologist, but this rash definitely doesn’t look like eczema to me, it looks like psoriasis.”

That’s it – that was the missing piece. I went online and discovered people with psoriasis could develop psoriatic arthritis and it commonly started out in the feet. I promptly made an appointment with my dermatologist and took her the MRI and x-rays of my foot. I told her I thought I had psoriasis and psoriatic arthritis. I will never forget the gaping look on her face. She took one look at my swollen foot and referred me to a rheumatologist.

In January of 2009 (I was 29) I finally saw a rheumatologist. I spent 15 minutes with him, and I had my diagnosis confirmed. He didn’t have to run any further testing, that was it. It was psoriasis. It was psoriatic arthritis.

In a general sense, I’d imagine most people get upset when they find out they have a disease. Not me. I felt relief, happiness, validation… Finally I knew I wasn’t crazy! We went out for lunch to celebrate. I know that might sound slightly twisted, but after all of the years, tears, awful pain, and emotional suffering, we finally knew what it was. We could finally start treating it.

At one point in time, I really wanted to write a nasty letter to those podiatrists who hurt me, belittled me, and made me feel terrible about myself. I still can’t believe they missed all of the signs of an autoimmune disease. Secretly, a very small part of me still wants to write that letter, but mostly, I want to look them in the eyes and tell them that I forgive them.

I can finally forgive them, or really work on completely forgiving them. Why it’s taken me so long to get to this place I don’t know, but it’s time to let it go. Time to rid the box of its pretty bow and packaging, and let the ugly go. I don’t need it in my life anymore, and hanging on to it isn’t doing anything for me either.

This is linked to the EOA Link Up.

Sweet Megan, I so understand you on many levels. I was treated unforgivingly by the medical community, yet I forgive. (Forgiveness is more for the offended than the offender, and how could I not forgive, when I know how Christ has forgiven me?) It took decades before I finally diagnosed myself, they certainly weren't helping. It's been trial and error to find what diet is best, and I'm still trying... I'm an RN. I'm constantly telling people, "Listen to your patients!" Some listen, some don't. But every one that does, is a victory. :) I did have the privilege of returning to my GI dr, to tell him of my self-diagnosis. As soon as he saw me, he asked "what happened???" And you know what happened? He apologized for "missing it". I taught him for about thirty minutes, and he listened. And he thanked me for it. And he refused to charge me. But you and I know that this will not happen with everyone. This man is special...kind, humble, a Christian who lives it, and a joy to know. Heaven knows he tried! He just didn't know. But he says that now he knows how to help many more of his patients. THAT is victory! I saw rheumotologists, endocrinologists, podiatrists, GI specialists, and more. I've been poked, prodded, scoped repeatedly, and had multiple surgeries, some of which I didn't need. The sad truth is that we live in an imperfect world, with many doctors who are rushed and overworked. Therefore, they have little time to read and learn about new research. If they're going to pick something to read, most likely, they'll choose cardiology over gluten issues because of ignorance...they don't realize how it robs life from us. But it's not intentional. They don't get up everyday and purposely hurt their patients. Although I well know what it's like to have multiple physicians take out their frustration of not knowing on me...to use the "all in your head" card. I've shed many tears. I've lost jobs...multiple...because I couldn't stand up, or couldn't stop vomiting, long enough to take care of my patients. Though I sure tried...vomiting before report, in between pt's rooms, and after giving report. It's a difficult journey, but my Father is helping me through it. And for that, I am thankful. Thank you for sharing your journey. Much love, Jacqui

I went through a similar experience when my little girl (4 years old at the time) was diagnosed with Type 1 diabetes. Our pediatrician thought I was crazy. "Look at her, does she look like a child with diabetes"? She talked me out of testing her. Three miserable months later my daughter almost died on the soccer field. Yep, Type 1 diabetes. Every doctor in the pediatricians office apologized to us. Its so important to be our own advocates in health care. No one knows us or our children better than ourselves! I think you should write that letter to the podiatrist. Maybe they will think twice before they dismiss the next patient that has your symptoms.

Meghan- it's been over a year since your first post. How are you now?

I am hanging in there. :) I still have my moments of pain, the spondylitis comes and goes, but I maintaining. Thanks for asking! Hugs, Megan

Hi Megan! Your story sounds exactly like my husbands. We also live in Alaska. He was "diagnosed" with juvenile Rheumatoid Arthritis in high school. A diagnosis by default it's called because the Rheumatologists at the Cleveland Clinic couldn't think what else it could possibly be. He's gone to physical therapy, massage therapy, and has been on several intense RA medications. He's been to a podiatrist, an acupuncturist and just recently has been seeing Rheumatologist Dr. Botson in Anchorage. Have you seen him? We really like him.

There was a point in time that we thought maybe it was some other sort of autoimmune disease and went looking for answers. We've tried gluten free, dairy free, sugar free, etc. and have finally settled on being vegan while avoiding nightshades. Gluten doesn't seem to be a problem for him, but dairy creates a huge inflammatory response for him. He's on three different medications right now :( I know what you mean by just wanting to know what the disease is. We were right there with you and we would have gone out to celebrate as well! Dr. Botson has come to the conclusion that it's probably just juvenile RA that has progressed into adulthood.

I admire your strength and I'm so happy to have found your blog! I started a food blog as well. It's nice to release some of the sorrow and have a laugh. We should start an Alaska autoimmune disease support group! ;)

Katie! I'm so, so excited to connect with you! But very sorry to hear your husband is/has experienced similiar issues. :( I have seen Dr. Botson, and didn't care for him, but I'm very glad you both like him. It's so important to have a Dr. you trust and like!

Dairy creates a huge reaction for me too, so I can definitely sympathize there.

You are sweet! I'm happy too - and excited you aren't far from me! I'm going to send you an email. :) Hugs, Megan

I am with the group of commenters who have said to write to the doctors. They need educating but it might also be a form of closure on what they did to you. Post the letters and don't look back. 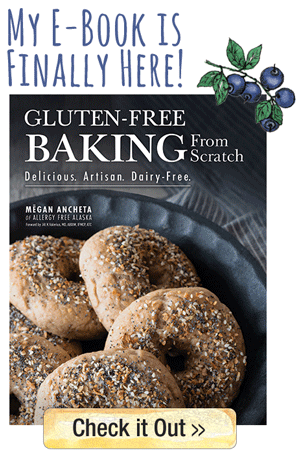